What an irony,
The god that illuminated the day,
Died
The mortals are alive


Do gods die?
Was he not at nether-worlds?
Traveling
Perhaps to a neighboring planet


Now comes the worst,
The maiden casts her dark shadows
Sunday Eclipse
Will there be another reprise 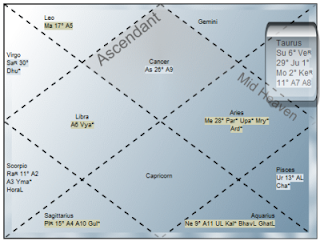 Enjoy the Solar Eclipse. Remember - Never look at the sun-god directly; wear appropriate eye glasses and eye protection.
Posted by Dev B at 8:46 AM 1 comment:

Astrology intrigued me from early 1990’s for several reasons. I was looking for a career path then. The soothsayers I came across were only interested in selling gem stones, especially precious stones on account of the huge profits they made. The astrologers would sell you anything like Ruby with Sapphire, Diamond and Emerald, Pearls that knew no upper limits – if you had most of these; then a Yantra or an encasement in 22 carat gold that you would be obliged to pay through your nose.
Incidentally, none of these popular and acclaimed astrologers had a clue around astronomy; where the stars and the celestial bodies were around at anytime around the year. They believed and swore around their misinterpreted charts, in their tantric dogmas and beliefs; none of which agreed with my thinking and rationale.
They had no clue or any idea of where astrology was headed except what they had been subjected to believe without any room for innovation. Had I not ventured to come to the US, my thoughts would have possibly been influenced negatively.
Jotiz is a modern way of looking at classical astrology whether it is Vedic or Christian. Vedic expands into Indian, Indonesian, Cambodian, Sri-Lankan, Celtic, Chinese systems as they are practiced today – I do not confine myself to any single text like Brihat Hora Sastra; but use Phaladeepika, Brihat Jataka, Saravali, Jaiminee, Jataka Tattwa and other texts that make sense into the mix. Christian Astrology owes the scriptures to Lilly and Raphael, to many Arabic and Egyptian narratives. The references to Horary in Jotiz are clearly inclined towards Christian astrology than Vedic.

Full Moon conjunct with Saturn! Saturn Retrograde in Cusp in exaltation. Opposition aspect (7th house) from both Sun and Jupiter.  Sun in deep exaltation with powerful spring blaze - it’s the time for the new generation. The old will falter for the next few days – perhaps a fortnight. Is Facebook the winner? From the young and old perspectives – it seems so easy – yes it is.
Posted by Dev B at 5:39 PM 1 comment: