March 29th should be an interesting day. Moon and Saturn exalted, though Saturn is still retrograde. Venus moves from detriment to own house. Sun closer to exaltation; just that Mercury has fallen.

An interesting day nevertheless; with a fallen Mercury anything and everything is possible.

Thank god Mars is not affected.

Metaphors in the night-sky

The last two weeks I am sure many of you have witnessed the South-Western sky with the two bright orbs lighting your path as you would drive back west. Fortunately, the drive back for me from work is west and very evening there appeared the bejeweled sky with Venus and Jupiter really close to one another.

I watched it every day; and back home shared it with family and neighbors. Even my grand daughter was so delighted to see a portion of the sky so intense and bright.

I just realized it was trying to tell us all something - something more than just a spectacle.

"A glowing Venus in close conjunction with Jupiter" - our seers and forefathers were so right - a person is truly wealthy in the presence of real knowledge. Wealth becomes a shining orb in the presence of knowledge and spirituality - a metaphor so profound; so subtle being played out in the vast sky stage right before us. 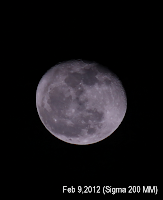 This winter I braced myself a few nights in the bitter cold to witness and capture the night sky on my digital SLR. On the left is the result of my first encounter with a winter moon on February 9, 2012 as it rose in the east. I must have wasted close to hundred shots steadying the aperture and the controls. The results were terrific - this picture was taken handheld.

On February 22nd after a storm, one could virtually count the celestial bodies. It was bitter cold
and the ground was frozen. It was a moonless night - I could get the Orion and Ursa Major. The Ursa Major pictures were awful with light pollutants in the southern sky.

On February 26th, it was a brilliant spectacle with Moon surrounded by Venus in Pisces and Jupiter in Aries. These images were taken with a tripod without any shutter controls. 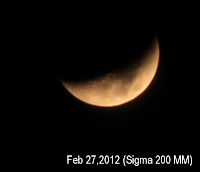 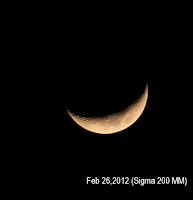 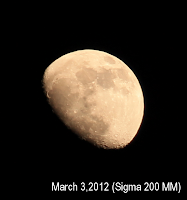